What Is A SPAC?

While SPACs have been around for decades, they have gained popularity in recent years.

The number of SPAC IPOs and amount raised increased 76% and 53% respectively for YTD September 2021 vs the whole of 2020.

This is a remarkable capital market performance in the midst of a global pandemic.

Why are SPACs popular and why should businesses pay attention? 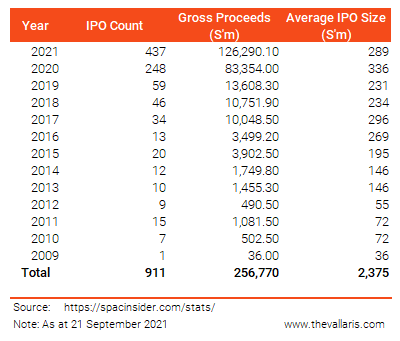 SPAC popularity in 2020 has been powered by late stage, mostly venture backed companies looking to sell portfolio companies against a backdrop of pandemic-related uncertainty in the IPO market.

SPAC became that vehicle of choice for the public to acquire these portfolio companies.

“A Special Purpose Acquisition Company is a company with no commercial operations that is formed strictly to raise capital through an IPO for the purpose of acquiring an existing company.”

exhibit 2: how a SPAC works 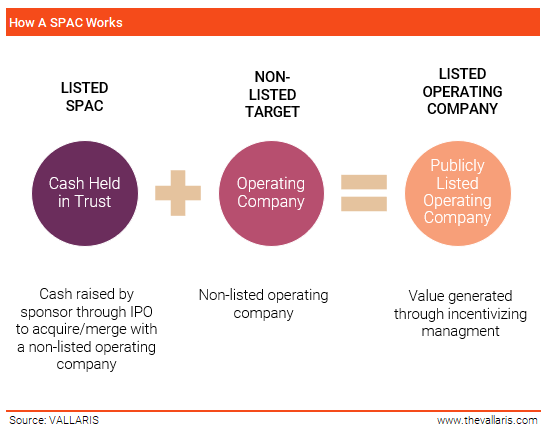 The operating company merging with or that is acquired by a SPAC becomes a listed company without having to go through an IPO.

A SPAC allows a non-listed company to list without having to go through an IPO.

A SPAC  is commonly viewed as a ‘blank-check’ company.

SPACs are typically incorporated by sponsors who have a particular interest or expertise in a certain industry.

SPAC investors therefore have no knowledge of the operating companies the SPAC will buy. In other words, investors are investing in the sponsors running the SPAC.

Why SPAC? Why Now?

An IPO is a traditional route for a non-listed company to raise a sizable sum of capital from the public. It does this by offering its shares on a stock exchange.

However, raising funds through an IPO is not an easy task.

A company has to navigate through a complicated, expensive and laborious process  that lasts years. The entire exercise could pose several issues like under subscription, unfair valuations, and negative market sentiments, etc.

CNBC notes that recently highly publicized flops of supposedly disruptive companies could paint an unpleasant picture ahead for how innovation is viewed in capital markets. Investors have shunned high-profile companies including WeWork, Uber and Tesla.

In 2020, things took a turn for the worse when COVID-19 arrived. Under lockdown circumstances, raising fresh capital through an IPO wasn’t a viable option. This was when SPAC became the knight in shining armor and garnered popularity among the masses.

In fact, WeWork aims to start trading in October 2021, two years after its IPO crash. Its vehicle of choice? You guessed it. SPAC. 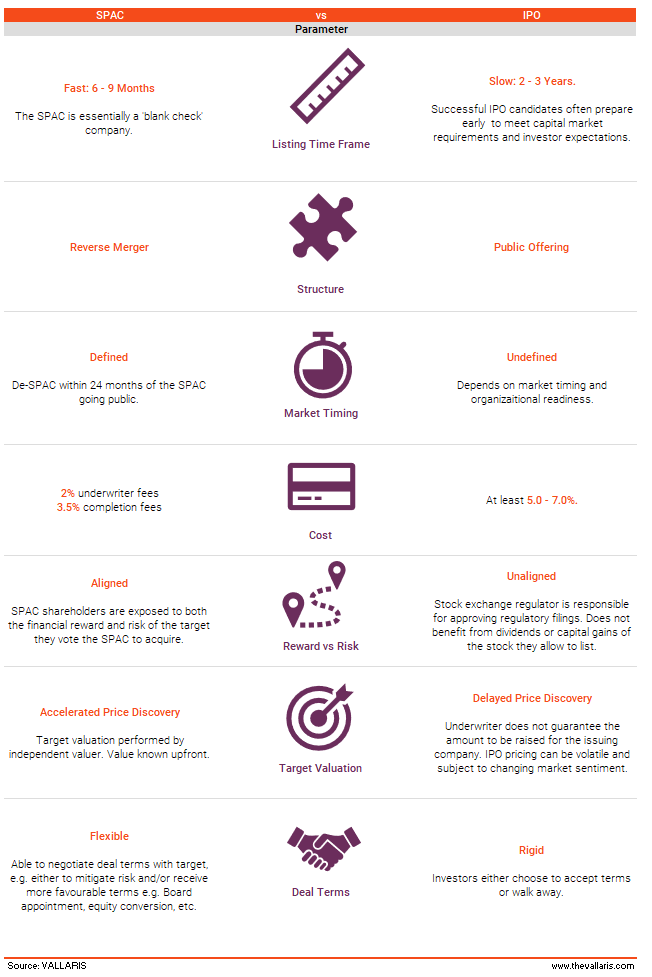 An SGX listing under the SPAC framework must have the following key features: 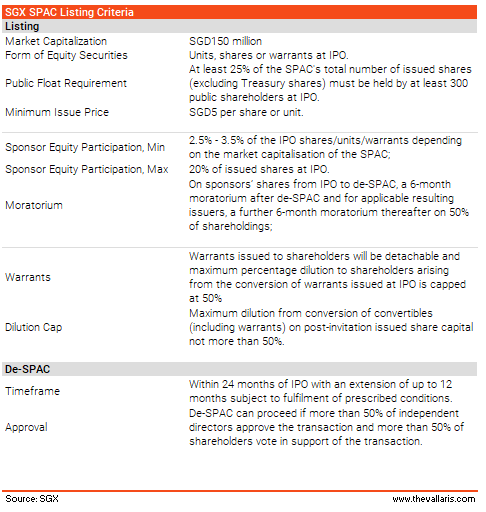 Why Do Non-Listed Companies Choose SPACs?

Since money has been raised by the underwriters during SPAC IPO, in the form of private investment in public equity (“PIPE”), no further negotiation with the underwriters will be required during the merger between the SPAC and target operating company.

In most SPAC mergers, at least one key personnel in the management team will be retained in the target operating company to serve as a key executive role or a key consultant on the board. This alleviates the risk of not meeting the investor objective after the business combination.

A SPAC is a good alternative for smaller companies that wish to go public that do not qualify for traditional IPO due to stock exchanges’ listing requirements.

SPACs typically have cash set aside for working capital purposes after retaining the bulk IPO proceeds in a trust account. This cash is typically less than $5 million. It will come in handy as it creates immediate capital appreciation and value for the target operating company.

Since SPACs are shell companies, there is no operating history that will not cause any drama, cost and headache for cleaning up the shell corporation prior to the IPO and business combination.

Since the investors’ fund is placed into a trust account immediately after the IPO (and earns interest income prior to the business combination), it reduces the downside risk significantly. In a worst-case scenario, a deal did not materialise, the investors will be returned with their initial investment at par value. Hence, conserving the investors’ value.

A SPAC, after completion of its IPO, starts its 24-month countdown (typically) to consummate a transaction. It forces the SPAC management team to search for a suitable target operating company that fits all of its investment criteria. The SPAC will return all of its IPO proceeds (previously placed in a trust account) back to its investors should if fails to complete the business combination within the stipulated time period.

Unlike a venture capital where the pooled capital will be invested solely at the fund management team’s discretion, a SPAC seeks its investors’ input prior to proceeding with the transaction. SPAC investors who do not wish to proceed further with the target opportunity may choose to opt out and be reimbursed with their initial capital. In addition, SPAC investors have the right to vote on any opportunity presented as a target in a reverse merger transaction. Therefore, the greatest advantage from an investor’s perspective in a SPAC deal is the ability to have a say in the investment decision – a feature that greatly differentiate itself from the venture capital world.

How Does A SPAC Work?

SPACs have approximately 24 months from IPO to complete a merger with a non-listed operating company before it is to wind up and return funds. 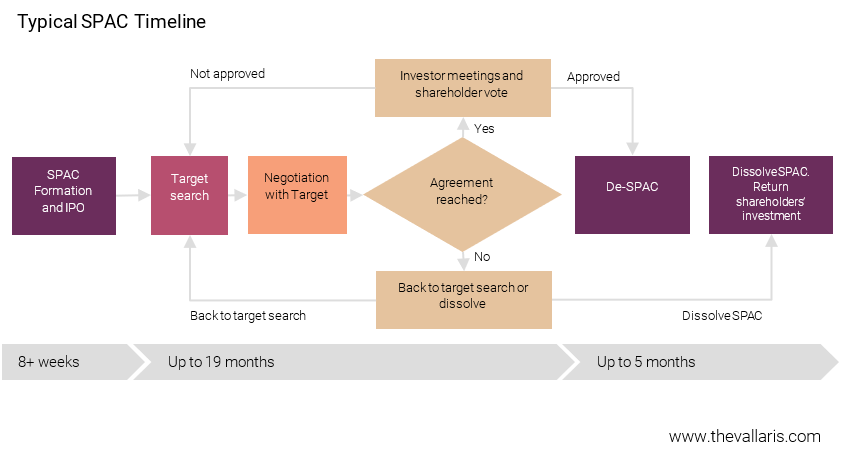 The sponsor, an executive team or investor with significant experience, launches a SPAC. The investment thesis is both sector and geography focused e.g. acquire a Singapore based healthtech business.

The sponsor creates the SPAC as a holding company and files for IPO. The sponsor completes a fund-raising roadshow to secure institutional investors by leveraging their investment track record and network to sell the investment thesis.

The sponsor makes  a nominal capital investment, typically translating to an approximately 20% interest in the SPAC. This is also known as founder shares.

The remaining 80% is held by public shareholders through ‘units’ offered in the IPO of the SPAC’s shares. Each unit comprises one common share + a fraction of a warrant.

The SPAC has up to 24 months to identify and complete a merger with a non-listed operating company. This transaction is known as de-SPACing.

If the SPAC does not identify a merger within the time frame, the SPAC liquidates and IPO proceeds plus interest are returned to its public shareholders.

Once a target company is identified and a merger is announced, the SPAC’s public shareholders may approve the SPAC merger.

If the SPAC requires additional funds to complete the merger, the SPAC may issue debt or additional shares, generally as a private investment in public equity (“PIPE”) deal.

When all regulatory hurdles have been cleared, the merger closes and the target operating company becomes a public entity.

If shareholders vote to reject a merger, they elect to redeem their shares with interest.

How Does A De-SPAC Work?

The salient terms of SGX’s de-SPAC guidelines are summarized below: 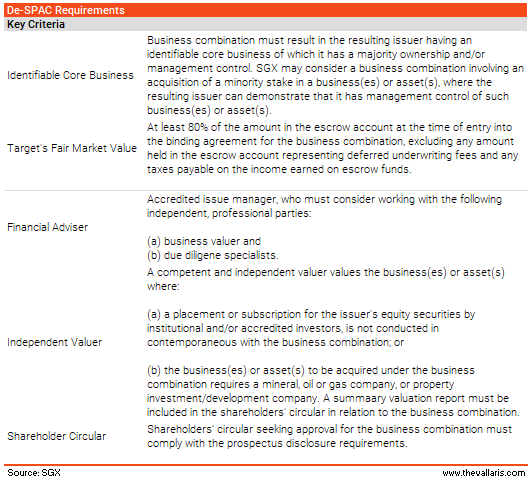 How VALLARIS Can Help 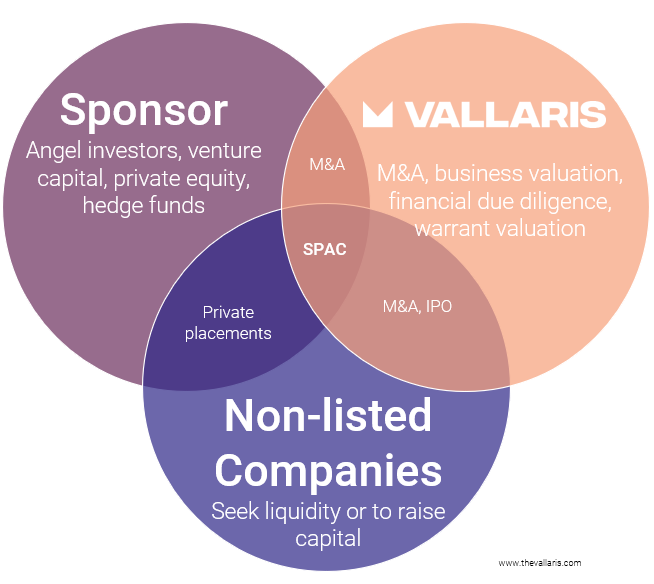 Sponsors and target companies often underestimate the process flow, nuanced paperwork requirements, or other strategic considerations required to navigate SPAC-related transactions. Many can also be unprepared to navigate the rigorous due diligence process that can distract executives from day-to-day operations while exposing the companies to unforeseen risks if they’re not thorough in their examination.

A merger with a SPAC is a great opportunity if you are looking for a strategic partner to bring your company into new markets. SGX now offers SPACs as a quicker access to public capital for those that wish to avoid the hassle and time commitment of a traditional IPO.

If your business aims to access a significant amount of capital without the pain of going through an IPO, contact VALLARIS to start a conversation.

More On This Topic

How To Explain Forensic Accounting To The Police

Mun Siong Yoong, VALLARIS Founder and CEO, Explains Where the Digital Economy Is Headed Next